My Symptoms Were Dismissed as Hemorrhoids, but I Had Colon Cancer

by healtcare
in Women's Health

As told to Liz Sauchelli

The day I got my colon cancer diagnosis, my husband and I bought a bottle of champagne. We were driving home from the hospital crying and I just said, “Babe, we need to stop and get a bottle of champagne because we’re going to toast to kicking cancer’s butt and being on the other side of this thing.” In the picture I have from our toast that day, our eyes are swollen from tears.

My cancer journey began nearly seven months earlier in January, when I was 47. I was feeling lightheaded, dizzy and bloated. When I went to the bathroom, I wasn’t having a complete bowel movement. My appetite had decreased and by the time I went to my OBGYN in March, I’d begun to notice a little bit of blood in my stool. My doctor brushed it off and said it was hemorrhoids, but I pushed back. She agreed to order me a fecal occult test to see if they could detect cancer.

The test came back negative, but something still felt off, so I called my doctor back a couple months later and asked her to schedule a colonoscopy. In the months leading up to the procedure, my condition worsened. I could barely eat and the blood in my stool greatly increased. 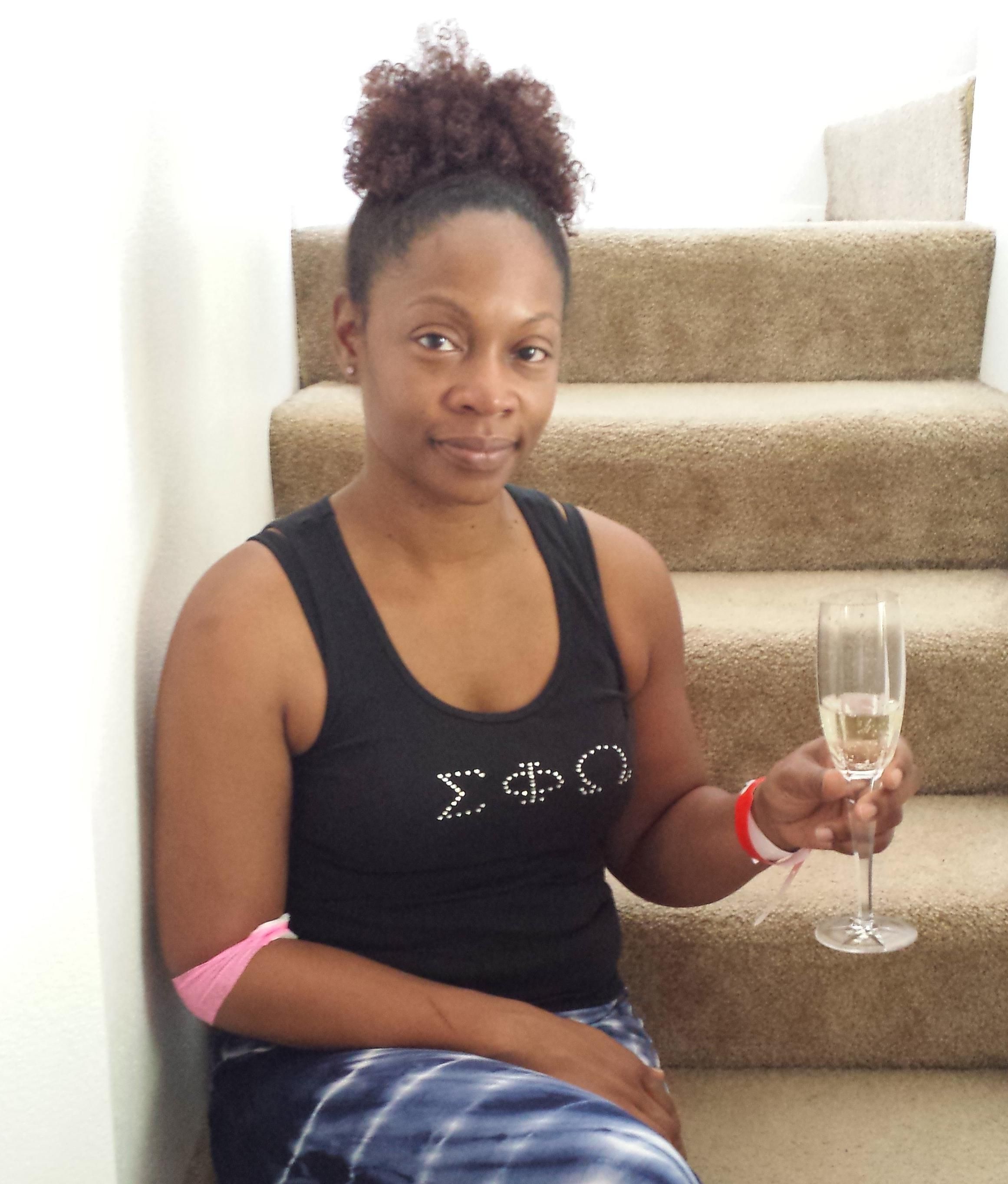 Kimberly with her champagne, celebrating “kicking cancer’s butt” after her diagnosis, July 24, 2015.

But when I went in for a consult before my colonoscopy, the physician wasn’t even sure if they were going to screen me. Then I showed her a picture of my bloody stool and her attitude completely changed. I got an appointment for the next week.

At that point, I knew something was really wrong, so it wasn’t a complete shock when I woke up from my colonoscopy and the doctor told me I had a fist-sized, malignant tumor in my sigmoid colon. But he never said the word “cancer.” My husband and I had been laughing coming out of the anesthesia, but I stopped. “Wait, are you saying I have cancer?” I asked. The doctor replied with a somber yes.

Everything shifted. The color in the room was different. It felt like a film dropped over my eyes and from that point forward, I saw the world differently. Time seemed more finite.

I was a busy stay-at-home mom with a 7-, 10- and 12-year old, and I was always on the go. At the time of my diagnosis, my children were visiting their grandparents in California, so my husband and I had a couple of weeks to process the news before sharing it with them.

Of course, they took it hard because, even though they were young, they knew the word cancer and they equate it with death. We all started to cry. I couldn’t promise them I wasn’t going to die — I just didn’t know. But I told them, “Hey, we’re going to fight this and we’re going to get through it the best we can.” And that’s exactly what we did.

Life became a whirlwind of doctor’s appointments. I had six weeks of oral chemo and 33 radiation treatments to my pelvis to shrink the size of the tumor. Then, 10 days before my surgery to remove the tumor, I suffered a bowel perforation and obstruction. One of my kids found me in the fetal position in the bathtub, and I told them to go get the neighbors. By the time they got me up and dressed, the ambulance rushed me to the hospital, where I had emergency surgery.

Recovery was slow. After 10 days in the hospital, I had six weeks of occupational and physical therapy to start walking again. The really cool thing about it, though, was that it helped me to stop and literally smell the flowers, to take in things that I would normally just pass by. As I used my walker to get around my neighborhood, I stopped to take photographs of flowers and nature. For the first time, I started to truly appreciate the little things.

Throughout the six months of chemo following my surgery, I tried to stay positive. Before going in for chemo, I’d watch a comedy like “I Love Lucy” to elevate my mood. I’d do small exercises to get my endorphins up.

As optimistic as I’ve tried to be, there were many nights I cried myself to sleep because I was in so much pain. I let myself grieve the parts of my body that changed and acknowledge that what I lost was important. Then, I’d focus on the fact that I was still alive, that there were ways I could still enjoy life. I cherish every day I wake up next to my husband and spend time with my children. 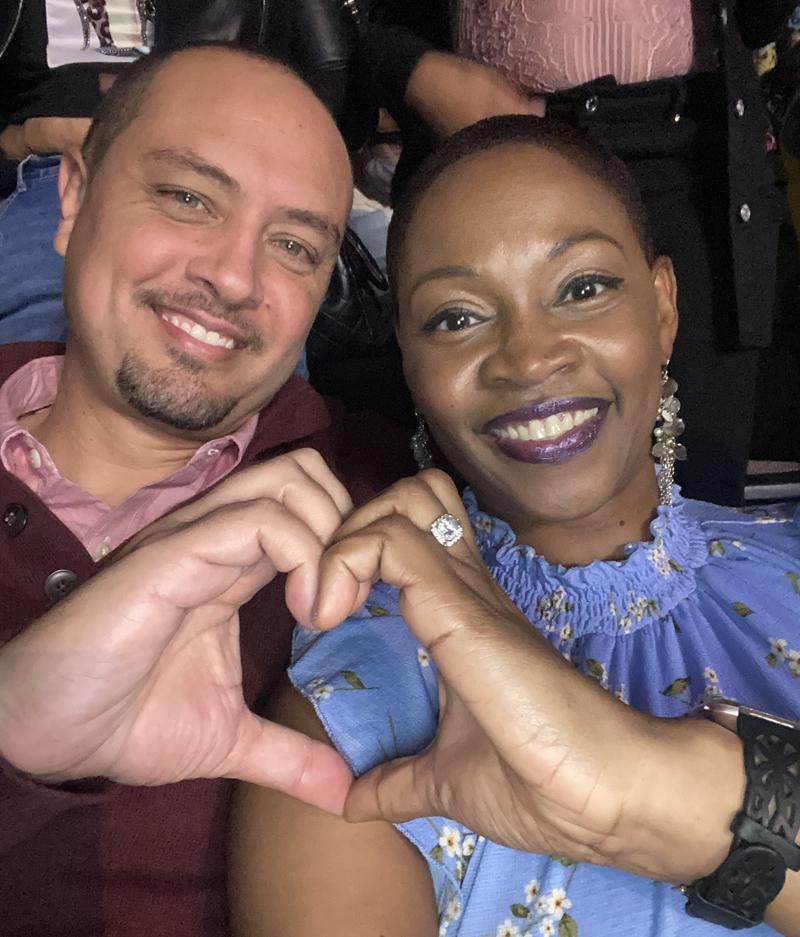 Kimberly on a recent concert date night with her husband of nearly 23 years, whom she describes as the “most compassionate caregiver” 2022.

I’d been told before surgery that I’d have an ostomy bag for six weeks, but because of the complications I suffered, that timeline was moved to two years. I took it in stride. After the two years were up, I decided to keep the bag: Reversal surgery can be pretty hard on people, and I didn’t want to put my body through more trauma.

I’ve now had my ostomy bag for six years and, in some ways, it’s been very freeing. After my diagnosis, I struggled with how I viewed my body. I wanted to reclaim my femininity and rebuild my strength after my body was weakened by treatment. That’s when I decided to take up dancing.

Burlesque and pole dance are art forms that I’ve always loved to watch, but I don’t think I ever thought I’d try them. But after my diagnosis, I had the courage to do so. Pole dancing improved my strength after my body was weakened by treatment. I also started performing, which has helped me build my confidence and feel more comfortable in my body as it is now. When I dance, I proudly show off my ostomy bag. It’s part of who I am and what I’ve survived.

Five years after I was declared cancer-free, I was diagnosed with ischemic colitis, which means the arteries in my colon are starting to die. I have been on different medications and bouts of bed rest as the doctors work to figure out the root cause.

But I continue to keep my spirits up. I dance, I roller-skate and I continue to advocate for people who have colon cancer. I never imagined I would look back six years after my diagnosis and be thankful that I was enriched by that journey. Each day, I take a moment to focus on the fact that I’m still here — and I can still enjoy my life.

This resource was created with support from Merck.

Centene to sell Magellan Rx, PANTHERx Rare for $2.8B

Centene to sell Magellan Rx, PANTHERx Rare for $2.8B