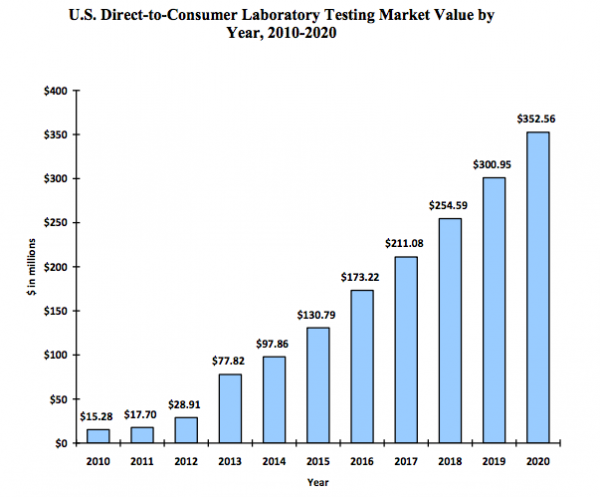 Direct-to-consumer laboratory testing is on the rise, as consumers become more educated and proactive about their own health. The market’s expected to grow past $350 million by 2020 – a significant increase over a nearly negligible $15 million just a few years ago, according to a new report from Kalorama Information.

It outlines the drivers of this forthcoming growth spurt in direct-to-consumer lab testing, and indicates who some of the key players in the field are today.  While not comprehensive (Pathway Genomics, for instance, is missing), the report’s list is certainly a useful tool in understanding the competitive landscape in this growth sector. With companies like Illumina spinout Helix entering the fray, this space will undoubtedly get more congested in the coming years.

The direct-to-consumer test market is a bit fragmented – between traditional diagnostics purveyors and those providing genomic screening that have emerged in the past few years.

The report lists obvious choices like Quest Diagnostics, LabCorp and 23andMe – and deigns to include even Theranos, despite its recent spate of bad PR. Though it doesn’t make it on here, we’ve thrown in Pathway Genomics for good measure. If there are any important outliers that are missed, please let us know in the comment section.

In the meantime, here are 20 key players in the direct-to-consumer lab testing market:

23andMe’s bread and butter is providing genetic analysis to its consumers – offering insights on ancestry, physical characteristics and inherited disease testing in the form of carrier screening. The Palo Alto company also ships out depersonalized consumer data to companies like Roche and Pfizer, and has a newly forged therapeutics arm. It has completed five financing rounds, raising more than $230 million in equity.

Around since 1992, this traditional direct-to-consumer test provider operates on a franchise model with more than 150 independently owned stores. Home base is in Georgia. Its offerings include tests for paternity, STDs, drugs, allergies and diabetes management.

Using next-gen sequencing, Bay Area-based Color Genomics sells “Color Kits” for $249 that analyze 19 genes – including BRCA1 and BRCA2 – to help users understand their risk of developing ovarian and breast cancer. The tests need to be ordered by a physician – either the customer’s, or one designated by Color. The company’s made up of former developers from Google and Twitter, and is collaborating with health systems like University of Pennsylvania and University of California, San Francisco. It was launched last year with a $15 million fundraise.

The San Francisco company’s primary focus is on family planning: Helping those who are pregnant, or thinking about it, to conduct family prep screens or informed pregnancy screenings to rule out parents’ carrier status of certain inherited diseases. It also provides testing for inherited cancers – all necessary under the supervision of a healthcare provider. The company’s raised more than $100 million in six equity rounds.

Louisiana-based Direct Labs was founded in 1993, making it another early entrant into direct-to-consumer testing. It offers wellness screening, as well as diagnostics for arthritis, autism, cancer and a number of other diseases. The company partners with Quest Diagnostics.

The Houston company offers a whole array of genetic testing – including carrier screening, whole genome sequencing, mitochondrial DNA sequencing, and family tree analysis. It was actually launched in 2000 as Genealogy by Genetics, but was restructured and renamed in 2012.

A precursor to Theranos, this company allows multiple laboratory tests to be performed from a few drops of self-collected blood. Based in Illinois, Home Access Health was founded in 1993.

An obvious player in this game, LabCorp tests 500,000 specimens daily and works with some 220,000 clients – with some $6 billion in sales in 2014. Last year, the diagnostics behemoth announced it would allow customers to order lab tests online without a doctor’s order.

Utah testmaker MyMedLab was one of the first labs that allowed diagnostics to be conducted without the blessings of an overseeing physician. It offers general health testing, metabolic panels, and female and male health screens.

This India-based molecular diagnostics company was founded in 2012, and provides screening for genetic traits, drug response and inherited diseases. The company’s on the lookout for funding, having raised a $1.1 million seed round last year.

The San Diego company has a vast offering of diagnostics, ranging from cancer-predicting liquid biopsy to a $159 genetic fitness profile. It’s also got tests in the pharmacogenomics space, hereditary cancer space and carrier screening. Pathway Genomics is also rolling out a precision healthcare consumer app that uses artificial intelligence, powered by IBM Watson. The company’s had a few slaps on the wrist from the FDA, but in all it’s one of the more prominent direct-to-consumer diagnostics companies.

Another one of the diagnostics behemoths, Quest employs some 45,000 people and brought in $7.4 billion in revenue in 2014. While its model isn’t based on direct-to-consumer testing, it does offer a Blueprint for Wellness Direct Pay system for consumers to monitor their personal health and wellness. These can be ordered online, without a doctor’s order.

This Ohio-based company focuses primarily on testing for sexually transmitted disease, without requiring a physician’s order. It offers 59 test packages in all – including celiac panels, heart panels and immunity panels.

The company has a huge presence in Arizona, testing more than 20,000 patients per day at some 70 patient services centers in the state. However, it’s launched a new service, called My Lab ReQuest, which offers direct-to-consumer wellness testing. This past November, it partnered with Safeway grocery stores to open diagnostics centers in a retail setting.

Heralded a low-cost, ubiquitous diagnostic option that could make assessments based on a pinprick of blood, Palo Alto-based Theranos soared to a $9 billion valuation – before that bubble burst in recent months, thanks largely to a critical piece in the Wall Street Journal. As of July 2015, however, the company held more than 26 issued patents – and had raised some $400 million in equity.